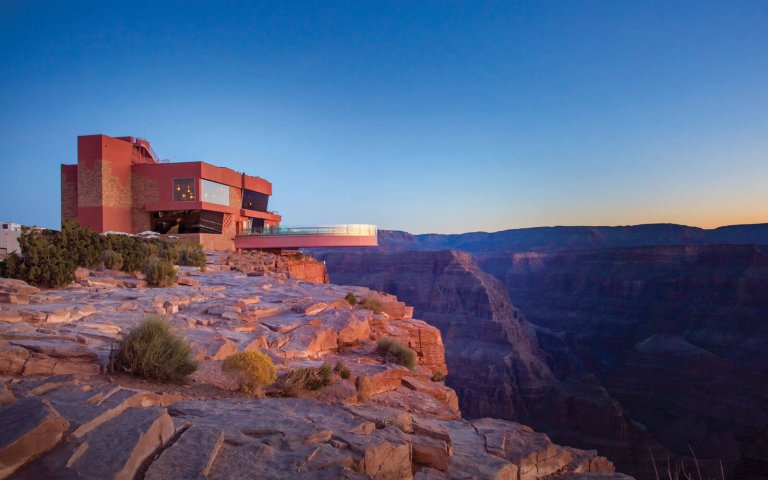 On March 28, 2007, Skywalk opened to the general public at Grand Canyon West. This 30 million dollar modern engineering marvel took four years to build. At that time, Skywalk was the world’s biggest glass cantilever bridge at 70 feet (China’s walkway in Chongqing took that title in 2016 by extending 87.5 feet), soaring 4,000 feet above the Colorado River, offering breathtaking views of the awe-inspiring natural wonder of the Grand Canyon. How did this amazing masterpiece come to be at the Hualapai Indian Reservation?

Construction began on this one-of-a-kind glass-bottom bridge in 2004. The u-shaped observation deck appears to float on thin air. Engineers employed the same rod and plate method used on the Egyptian pyramids to roll Skywalk out over the Grand Canyon’s edge creating an unencumbered view from the bridge. Support beams formed the foundation by anchoring deep within the red limestone bedrock of the site, acting as counterweight rods. This allows Skywalk to extend over the canyon’s edge with no direct support from underneath.

The Skywalk is a safe and secure way to view the Grand Canyon from new heights. The sidewalls stand four feet six inches above the bridge floor and are constructed with forty-six custom-built glass panels. A removable top layer covers each section for ease of maintenance, and the use of glass panels allows for a crystal-clear view to the floor of the Grand Canyon below.

Highly skilled craftsmen used 1.2 million pounds of steel and glass to build the Skywalk, using glass units that can hold up to 800 people at any given time. Additionally, the glass bridge can withstand an 8.0 magnitude earthquake, wind speeds up to 100 miles per hour, and can support the weight of 71 747 airplanes.

On March 20, 2007, a private ceremony unveiled the Skywalk to its first guests. Astronaut Buzz Aldrin joined the Hualapai Tribe to lead the first sky walkers along the u-shaped cantilevered glass bridge. The general public got to don paper booties and take their first steps out over the Grand Canyon eight days later.

Skywalk was the vision of a Las Vegas businessman, David Jin, who owned a tour company that offered services to Grand Canyon West, an attraction on the Hualapai Indian Reservation. As a sovereign nation, the Hualapai Tribe does not receive any economic assistance from the government, opting to invest in the tourism industry to be self-sufficient. The addition of Skywalk was an economic boost to the tribe by adding a one-of-a-kind experience to the other attractions and experiences found here, including a zipline, gift shops, restaurants, whitewater river rafting on the Colorado River, and helicopter tours.

Grand Canyon West welcomes visitors from all over the country to experience the heart-pounding, soul-searching, bucket-list-checking adrenaline rushes only found on the West Rim. Guests can purchase general admission tickets to Grand Canyon West to explore Eagle Point, Guano Point and the main terminal. An add-on Skywalk ticket takes each guest from the rim out over the Grand Canyon for views not available anywhere else. What’s more, hundreds of wedding proposals have been accepted at the west rim, and special events, including the Kaskade show and a visit from Bearsun, have happened at Grand Canyon West.

In January 2020, Grand Canyon West celebrated its ten millionth visitor, a mother and daughter from Kansas City, Missouri. They are but four of the millions of feet that have shuffled or strolled across its glass surfaces, drinking in the majestic beauty of this wonder of the world. Due to its sturdy construction, Skywalk will be here for millions more.

Grand Canyon West is located on the Hualapai Reservation at the west rim of the Grand Canyon, with the white water rafting and Hualapai Lodge located in Peach Springs, Arizona. Use this map to find your way to your next grand adventure.